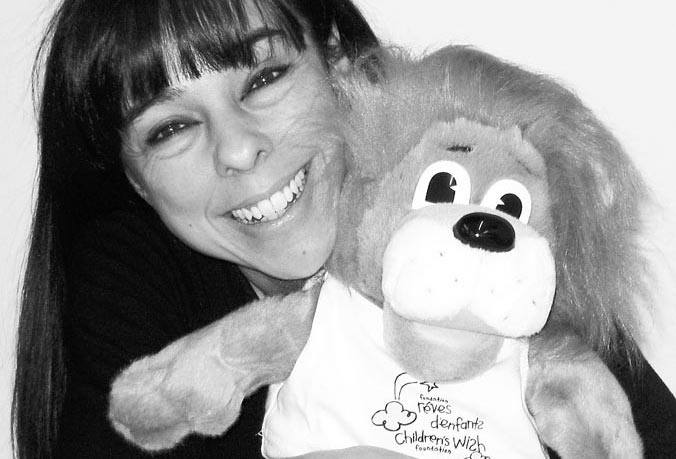 I’ve met someone who grants wishes—really!

Petite and delicate, Suzie Mousseau is light on her feet, which are shod in spangled espadrilles. Her dark eyes are bright and laughing, and serpentine wisps of hair escape her up-do to dance about her shoulders. I think to myself that she’s exactly what you might expect a person to look like after 20 years of making wishes come true for the Quebec chapter of the Children’s Wish Foundation. Here’s a closeup of the wonder woman who’s half impish pixie, half Tinker Bell.

“Today’s a happy day,” she said, offering me a seat. “I’m calling families whose children have been accepted by the Foundation. I’d rather that the parents give the kids this great news, because they usually have to tell them there’s been a setback or new treatments are needed.”

I imagine that some days aren’t as happy. I was supposed to meet Suzie three weeks earlier, but she had to cancel because she needed to attend to wishes made by three children in the final stages of illness. At moments like those, she knows it will be the last time she sees them.

How did you become a wish coordinator?

S.M. Oh, it’s not much of a story! I was working as an event organizer, staging gala events, but I knew it wasn’t long term. When the Foundation advertised for a coordinator, I applied.

Why did you get the job?

S.M. I thought it was because of my background in social work—but it wasn’t. They hired me because I was already volunteering to organize charity activities. So let’s say the combination of my experience and my attitude helped me land the job.

From the glamorous world of special events to a charitable foundation. Do you ever regret your decision?

S.M. Never! The salary wasn’t the same, but I was young and had no children at the time, so I was able to make the sacrifice. I’ve never gotten so much satisfaction from my work as I do here. The first call I made went like a dream. I quickly realized what a difference I could make. A gala dinner or meal with a hockey player, all they require is organization. But that brief moment when a child’s wish is granted brings such joy all around, everyone involved gets so much from it.

Are all wishes that easy to grant?

S.M. The ones that are the most challenging to coordinate aren’t the most outrageous. What makes them complex is the child’s physical condition, and what medical equipment has to be on hand. In any case, the last week before a wish is carried out is crazy—for sure! So I shut my door. I have to really focus; I can’t overlook any details. My colleagues know to leave me alone. I can’t do anything that will impact the Foundation’s reputation.

What’s the most popular wish?

S.M. To travel! Especially to Disney World, and that’s normal. These are kids, Orlando is a magical place, and they’re really well organized. Families return home transformed, with memories of the moments they shared together. And when one child has a severe illness, brothers and sisters are affected too, so kids are happy when their wishes benefit everyone.

What was the most outrageous wish?

S.M. The first trip to Bora Bora. Thanks to the reality show Occupation Double—where the couples were shown on the island—more and more teenagers were naming Bora Bora as their wish. At first we had to find the right people, figure out the travel, and all that. So now I’m the “Queen of Bora Bora.” When chapters in other provinces are asked to grant that wish, they call me.

What was the most difficult?

S.M. When a child passes away before the wish is delivered. You never get used to that. [Speaking softly, she gestures to the Mount Royal cross visible from the window.] The angel of Jeanne-Mance Park is just a little farther. I can’t see it, but I know it’s there. I don’t know what lies beyond, but it had better be sturdy because I’ve been directing my emotions that way for 20 years. I bawl, I cry my heart out. The death of a child is so unfair. It’s draining, but each tear I shed represents my respect for them.”

Do you have to develop a thicker skin?

S.M. No, we don’t—and I don’t want to. I would lose my sensitivity and ability to listen, which are the key to doing my job well. So often people say to me, “you’re so grounded.” But I’m not grounded, I’m focused! You have to be fairly sensitive—maybe a little crazy—to do this. But I keep doing it because I won’t let illness stop us. Children’s wishes, that’s not illness, it’s magic! I just want to make their wishes come true and have a good time doing it.

At Blue Cross, when we receive copies of thank you notes from the families, we notice that they’re often addressed directly to you.

S.M. That’s because I’m the one who speaks with them and works directly to make wishes come true. But it’s our teams who make the Children’s Wish Foundation what it is. When parents ask me, “how can we thank you?” I always say, “talk about the Foundation. Tell everyone you know about us! You never know who will hear the message.”

“Not much of a story,” she said. Suzie Mousseau is anything but unremarkable. I thank her for her time and she walks me out, not surprised that I give her a hug instead of a handshake. It’s not every day you meet someone who grants wishes—and I’m the better for it.

In this season of sharing, you can join Blue Cross in donating to the Children’s Wish Foundation.