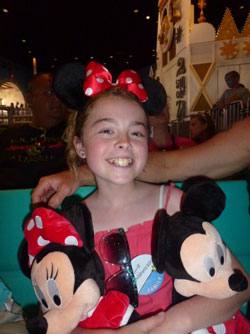 Right from birth, Clodia drank a lot more than “normal” children and also had issues with her digestive system. When she was ten months-old doctors made her go through a series of tests and diagnosed cystic fibrosis. “We really didn’t know anything about this disease, says her mom Chantal. We were kind of in the dark, but we knew it was serious.” Two months later, just as she was turning a year-old, Clodia was hospitalized at Sainte-Justine for two weeks. “That’s when we realized she had a life threatening illness and that she would be fighting for her life on a permanent basis.” Indeed, over the years, she’s had to take a lot of medication and follow many treatments, but things seemed to go fairly well until she turned nine.

She then contracted a bacteria which caused irreversible damages to her lungs. She was hospitalized on several occasions, had many intravenous treatments, a biopsy and a gastrostomy. Her pulmonary capacity deteriorated from 100% to 40% in a span of 18 months. “Our family life changed completely, says Chantal, and her younger brother had to adapt to the routine imposed on us by the treatments.”

“But love is stronger than anything and it keeps us together, says Chantal. And that’s what Children’s Wish is all about.” After a social worker told her about the Foundation, Chantal contacted the organization and Clodia began imagining what her wish could be. After contemplating several options, Clodia chose to go on a Disney land and cruise trip with her family. “During the whole process, you’re living a dream. It’s made us really happy.”