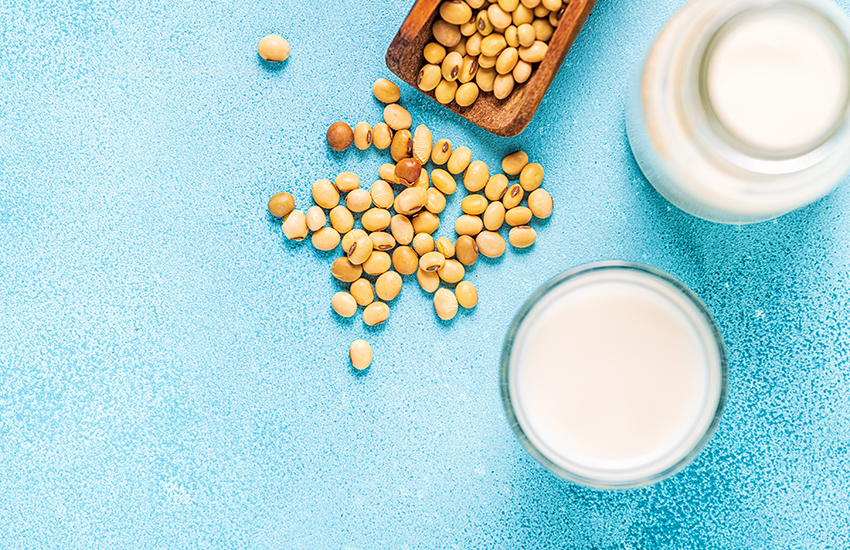 If you’re lactose intolerant or are trying to consume fewer animal products for ethical or environemental reasons, there are so many alternatives to cow’s milk on the market for you to enjoy.

The list of plant-based beverages made from grains, legumes, seeds, and nuts is growing, with new products hitting the shelves every year. We’ve compiled a list of seven popular non-dairy substitutes and included the pros and cons of each to help you navigate the options.

Soy milk comes in a variety of flavours such as chocolate, strawberry, and vanilla. But be sure to check how much sugar is added—some products contain up to 18 grams per cup. For a healthier option, opt for the unsweetened original variety or a flavoured version that is low in added sugar.

The sweet flavour and creamy texture of almond milk makes it one of the most popular plant-based beverages. It’s low in calories and is a good source of vitamin E, calcium, and monounsaturated fatty acids, in addition to being available at most grocery stores. It’s also a good option if you’re looking to limit your sugar intake, provided you choose a variety with no added sugar.

Like most plant-based beverages, almond milk is not a good source of protein—it contains less than two grams per cup. Almond milk is also one of the most harmful plant-based milks for the environment—it takes up to 74 litres of fresh water to produce a single 200 ml glass—but is less polluting than cow's milk.

Oat milk is known for its naturally sweet taste and smooth texture. It’s great in smoothies, with cereal, or simply on its own. It’s often fortified, making it a good source of B vitamins, such as B2 and B12, and contains a high level of beta-glucans, which are known to lower cholesterol. However, it only contains three grams of protein per cup.

Oat milk is a good option if you have nut, lactose, or soy allergies or intolerances. If you are following a low FODMAP diet, you can buy a gluten-free variety.

Coconut milk is made by blending white coconut flesh and water. It’s a very popular substitute for cream and is used in many Asian, South American, and Caribbean cuisines.

Coconut milk has fewer calories than cream and is a good source of iron and other minerals. However, it’s not a perfect substitute for cow’s milk, since it contains very little protein (around five grams per cup).

It makes an excellent ingredient in rich, creamy sauces. A lot of coconut products on the market can be used in place of dairy products, such as coconut cream and coconut-based yogurt substitutes.

Rice milk is known for its subtle and naturally sweet taste. It contains very few allergens, making it a good option if you have dairy, nut, soy, wheat, or gluten allergies or intolerances. Rice milk contains a significant amount of carbohydrates—much more than most other milk substitutes—so it may not be the best option for people with diabetes. Compared to the other plant-based drinks on the list, rice milk is low in nutritional value and contains almost no protein.

Like almond milk, rice milk is hard on the environment, requiring up to 54 litres of fresh water for a single glass. A balanced diet should include a variety of grains, so opt for another plant-based beverage if you already consume a lot of rice.

Cashew milk has a rich, creamy consistency, making it an excellent substitute for milk products in various recipes, especially creamy sauces. You can find it in most grocery stores and it comes in a variety of flavours. Like the nut itself, cashew milk has a sweet, rich, creamy taste, which explains why it’s becoming so popular. It’s also loaded with nutrients such as monounsaturated fats and potassium, especially if it’s homemade.

It contains slightly more protein than almond milk, but is still not a sufficient source of protein.

Like most plant-based beverages, hemp milk comes in a variety of flavours such as chocolate, vanilla, and strawberry. It contains more protein that most plant milks, apart from soy, and is a source of good fats and omega-6 and omega-3. It’s also a great choice for people who don’t eat gluten, nuts, dairy products, wheat, or soy.

Hemp milk has a strong, pronounced taste, which might not appeal to people who prefer a more neutral or sweeter plant milk.

Hemp milk is often produced locally, which means fewer greenhouse gas emissions from transportation, but it is harder to find—not all grocery stores carry it.

NOTE: This article is for information only and cannot replace expert advice.

Oat Milk: Nutrition, Benefits, and How to Make It

Hemp Milk: Nutrition, Benefits and How to Make It

What Is Almond Milk, and Is It Good or Bad for You?

The 9 Best Nondairy Substitutes for Milk